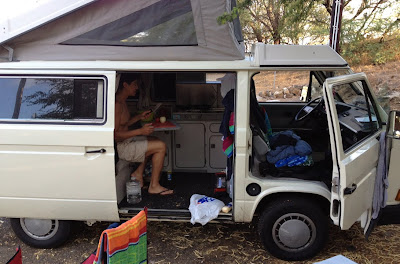 I went camping in the rented Vanagon on the big island of Hawaii last year. There’s nothing like sleeping to the sound of the waves breaking at the purple shore at night, or having a hot cup of Kona coffee while watching the sea turtles floating about in the calm morning sea. Hawaii is a beautiful spot to camp in, with so much to see and do with nature. I have looked at other camping trips that I can take in different parts of the world such as Iceland, it’s the opposite on the weather scale but the beauty of it will make anyone want to go! My friend who recently went there sent me this link – https://www.rent.is/blog/iceland-travel-guide/ so I can see what I can do and give myself a rough plan beforehand. It is definitely an option.

I found a camping map in the glove compartment of the Vanagon but one could pretty much camp anywhere along the ocean on the island. A large part of the big island is covered with rough harden black lava. This area is hot and dry but has many large sandy beaches. The other part is covered with thick vegetation, which every square inch bursting with dark green and fluorescent green leaves, and I believe it rains for about 5 minutes on the hour. In spite of all that, there are some beautiful vacation rentals built there for the tourists who want to enjoy some luxury; Exceptional Villas and many other reputed rental websites can offer plenty on this front for those of you who wish to sit back and relax while sipping a local Hawaiian drink. As for me, I’m more of a nomad who prefers camping!

After a couple of days, I drove into Hookena beach/campground. It’s the only park that runs by the local Hawaiians. The beach was beautiful with lots of trees on one side so I decided to drop my anchor for the day. There was a small tent at the entrance of the camping area with a walker right next to it. I thought it was odd but didn’t think much of it. After spending the day snorkeling at the beach, I fired up my little hibachi and enjoyed a glass of red Maui wine under the most magnificent sunset. The smell of my roasted pork chops blended in nicely with other delicious smell around the campsite at suppertime. In the distant, that odd small tent ruffled a bit and a very skinny man came out reaching for his walker. It took him forever to right himself up. He moved slowly along the short concrete wall that separated the beach from the parking lot. He would move about 4 feet and rest on the wall for about 5-10 minutes. After a while, I realized he was heading for the portal potty. I said to myself how the heck did he manage to set up that tent. A couple of people stopped by my camp area to chitchat. One was Murray, an elderly gentleman from Australia and he’d been traveling alone for the past 6 months. Another was a young handsome couple from the Midwest. They were jobless and looking to move to either Hawaii or San Francisco. Of many things we discussed, one was about ways to reduce the cost of your Campervan Insurance. Being jobless and on the road mean every penny counts. We also talked about the weather and the way of life in the locality. After enjoying the nice conversation while getting cooled down by tropical breezes, people headed back to their own camp area then I noticed the frail man was sitting alone in the dark next to his walker. I didn’t see any food in his area so I thought I’d be neighborly and offer some of my pork chops and bread. His face lit up as I approached him. I could tell that he was yearning for some company. I had some trouble hearing and understanding him but what I got was that his name is Tom. He’s from Alaska and proud to be 63 years old. He was tired of sitting at home staring the four walls so he decided to see the world before it’s all over (in his words). With no family and his government check, he travels to various campsites on the island by cab. He said no to my food because the porta potty was 50 feet away. Tom smiled and showed me a bottle of his whiskey. Said he’s on a liquid diet. I told him I would help him but he persisted and said he seldom ate. I told him if he wanted to come over to my camp area because it was closer to the water and view was incredible. He said his walker doesn’t go in the sand. I said I’d help him and he agreed. We sat their quietly looking at the water and Murray came by. We became the 3 musketeers on the beach. Murray told us his adventure in Australia, Africa, and India as the black Hawaiian sky lit up with millions of bright sparkling diamonds.

With my newfound buddies and the discovery of this mini paradise, I decided to stay an extra day. As the hot sun roasting the white sand, Tom took refuge in his tent and Murray painted himself white and read his book under the palm trees. I took the rented kayak to sea and explored the jagged coastline. I bounced up and down passing by intermittent lone Hawaiian fishing from the shore next to his giant truck with the giant wheels. I saw a small patch of white sand so I beached my kayak for some land exploration. A remnant of an oceanfront church stopped me in my track. I later learned that it was wiped out by the tsunami and a newer version is now high on top of a cliff above it. The water was getting rougher so I decided to head on home.

It was time to pay our daily five dollars to the owners of this beautiful camp if we want to camp for the night. The sun was still blazing. The three musketeers head for the pavilion but the Hawaiians weren’t there to collect the money. We waited. Murray who was 72 years old sat down at the table. Tom parked his walker and sat across from him. People came up to pay for the night and Murray jokingly pretended to take the money. Everybody laughed for almost falling for the “con man”. A giant truck pulled up from nowhere. It kept on moving until it crept inside the pavilion and the gigantic shiny metal bumper nudged our table. The doors opened and a large middle-aged Hawaiian couple climbed out. The wife looked down at the ground and her posture told me something was not right. The large man shouted at Murray for being in his chair. It was like time slowed down. I thought to myself it was an empty pavilion with no sign what so ever. How would anyone guess that it’s his chair? The man shouted as he pulled boxes out of his truck, “This is my House. This is my chair. When you are here, have some respect.” At first, we thought he was joking and would break into a smile at any moment. As he slammed a book on the table, he said to Murray, “You people take everything from us.” Everybody tried to mutter some reasons to him as Murray stood up and walked away like he walked away from a buzzing beehive.

The sun had cooled down and so was the angry Hawaiian. I was cleaning out the sand in my Vanagon and a smaller version of the angry Hawaiian appeared from nowhere. He came to apologize for his brother’s behavior. Said it was not the Aloha spirit and shook my hand. I thought it was nice of him but he should have said it to Murray and not to me.

As the night fell, the three musketeers gathered around my campsite for one last time. We drank as I grilled some sliced Spam, polenta, and mango. Murray was very quiet. I told him not take it too personally. I started writing about the angry Hawaiian’s point of view and the history of these native people with the invading mainlanders. Then, I decided against it. In all my travels, I simply admire and respect the people and their culture. I’m grateful to witness the wonders of the world and leave the place as I find it. And, perhaps pick up some trash from my fellow visitors along the way… 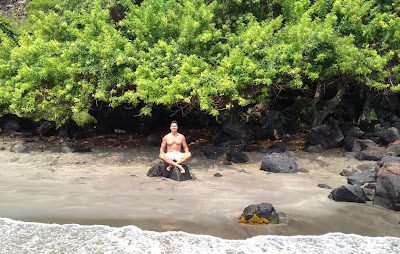 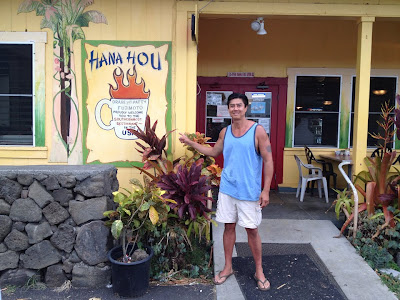 Hana Hou is the most southern restaurant in the USA. 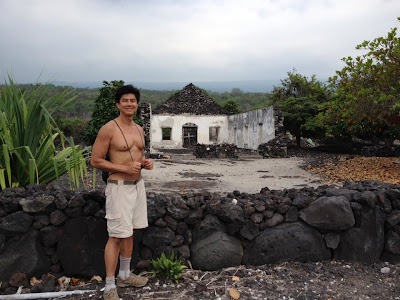 The old church that got destroyed in the Tsunami. 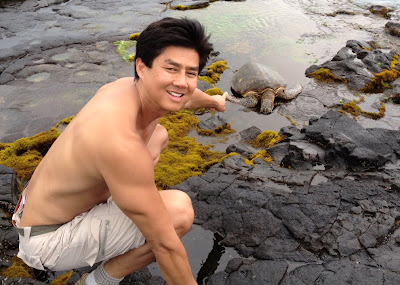 Sea turtle eating seaweed in the morning
I’m checking out my tan. This is the end of my trip and I rented a little cottage from a nice couple right on the private beach. The husband looks like Matthew McConaughey. He kept on hanging around my cottage, doing busy work. He asked me a couple of times, “Nice and quiet place ain’t it. Let me know if you need anything.” Well, that is another story….
Please Follow My Blog by entering your email below: